Nostradamus set down his prophecies during the height of France’s War of Religions, the predictable result of the Protestant Reformation. For instance, Nostradamus’ metaphor for Christianity is The Great Sterile Dame with four children, and her evil bastard child, The Pagan Sect of New Infidels.

As I wrote in my book, The Great Sterile Dame and her children is a metaphor and allusion that sounds more like Nostradamus’ version of a Taoist koan.

Nostradamus and The Third Age of Mars, The Complete Prophecies of World War III
G. A. Stewart, 2019, Pages 55-58

Nostradamus Epistle: Paragraph 13:1
For God will regard the long sterility of the great Dame, who shortly afterwards will conceive two principal infants:

TRANSLATION: Nostradamus Epistle: Paragraph 13:1
The Christian Church will become a sterile institution. Five hundred years after the Great Schism of 1054 CE, reconciliation between the Eastern and Western churches will fail. The Christian Church will remain divided into two principal sects, the Roman Catholic Church and the Eastern Orthodox Church.

Nostradamus Epistle: Paragraph 13:2
But she being in peril, [as] she who is adjoined by the temerity of the era being in peril of death in her eighteenth, unable to pass her thirty-sixth.

TRANSLATION: Nostradamus Epistle: Paragraph 13:2
With the Christian Church already in trouble, the foolishness of the Protestant Reformation will come to France. Calvinism will take hold in 1562 after the Massacre at Wassy.

It will struggle for eighteen years until Henri III of Navarre and the Huguenots capture the city of Cahors in 1580. Near death, the Huguenot cause will be revived and Henri of Navarre will become Henri IV, King of France.

In 1598, Henri IV will sign The Edict of Nantes. Thirty-six years after the Massacre at Wassy, the Calvinists will think that this instrument has given them their freedom.

But on October 18th, 1685, Louis XIV will revoke The Edict of Nantes and the Huguenots will be persecuted once again and Calvinism will be unable to survive in France. 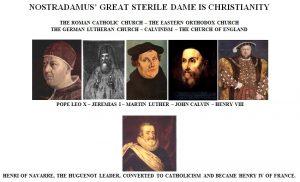 The Massacre at Wassy 1562 + 18 years = 1580
In peril of death [Calvinism] in her eighteenth [year].
Henri III of Navarre and the Huguenots capture the city of Cahors in 1580.
Henri III converts to Catholicism and becomes Henri IV of France.
[Calvinism] Unable to live beyond her thirty-sixth [year].
Henri IV signs The Edict of Nantes in 1598.
The Edict of Nantes 1598 – The Massacre at Wassy 1562 = 36 years.

What is the irony? Henri IV defeated the Catholic League and then in 1593 converted back to Catholicism to be crowned King of France in 1594. The new Bourbon King of France had his excommunication lifted by the Pope; he made peace with Spain, and then issued The Edict of Nantes in 1598, officially ending the 36-year-old civil war.

The 1598 Edict of Nantes was supposed to allow the Huguenots to worship as they pleased. It became a worthless piece of paper.

Nostradamus Epistle: Paragraph 13:3
She will leave three males and one female, and of these two will not have had the same father,

TRANSLATION: Nostradamus Epistle: Paragraph 13:3
The Christian Church will then give birth to three males, the Roman Catholic Church, the Eastern Orthodox Church, and the German Lutheran Church, and to one female, the Church of England, which like Calvinism will be fathered at the time of the Protestant Reformation, but they will not have the same origins.

Nostradamus Epistle: Paragraph 17:2
Her dominator will fall to the pagan sect of new infidels.

TRANSLATION: Nostradamus Epistle: Paragraph 17:2
Those descendants of the German Lutheran Church, the dominant Protestant sect, will eventually adopt Nazism and antisemitism. Out of fascism, a Pagan Sect will arise and align with the new [world order] infidels [Islamic terrorists/Al Qaida/ISIS].

There is no simple way for me to describe the identity of this group. The information and facts are so integral to the motives of the world’s Social Engineers, that to present my more outlandish interpretations, I first need to present readers with the evidence.

Nostradamus’ Pagan Sect of New Infidels are so important, that since 2007, in some form or other, I have always posted a detailed, updated, and illustrated version of this information on my website. It aids in understanding The Pagan Sect’s addiction to pageantry, ritual, and pomp. Nostradamus’ Pagan Sect loves their special effects.

For The First Son, The Catholic Church, winning the Cold War in 1991 and the collapse of the Soviet Union is its greatest military victory.

The Second Son is the Eastern Orthodox Churches and specifically Russia. Its greatest military victory will be crossing the Alps through Great St. Bernard Pass from Italy into Switzerland.

For those poems that simply mention “The Third”, readers will have to weigh the context of the poem. Variously, however, the metaphor of The Third Son of the Great Dame is pointing to the group that produced the Third Antichrist as well as the Third Antichrist himself.

The Pagan Sect of New Infidels is the evil step-child of the German Lutheran Church, where the Protestant Reformation began. Considering Nostradamus’ Third Son, I believe that this is a fine example of the multidimensional view of some translations. Therefore, use of “The Third” may be inclusive of Nostradamus’ Third Antichrist.

This is how Nostradamus works. He uses the family tree of The Great Sterile Dame to identify the regional areas of his predictions. The Roman Catholic Church represents Italy, Spain, and France.

The Eastern Orthodox Church is symbolic of Russia and the former Soviet Union countries in the Balkans and Eastern Europe.

The Anglican Church is associated with England, and although Calvinism died in France, it resurfaced in Great Britain, and notably Scotland. The Protestant Reform sects such as the Presbyterians, Puritans, and Quakers seeded the American colonies.

The First Son: The Catholic Church: The Vatican
The Second Son: The Eastern Orthodox Church: Russia
The Third Son: The German Lutheran Church: The Bilderberg Group
The Pagan Sect of New Infidels: The House of Orange-Nassau – The House of Saxe-Coburg and Gotha
The Daughter: The Church of England/Protestant Sects: American Colonists

The Queen of Great Britain may rule the Church of England, but the roots of the House of Saxe-Coburg and Gotha extend back to Germany.

Nostradamus Quatrain X-100
The great empire will be through England,
The pempotam [all-powerful one] for more than three hundred years;
Great forces to pass by sea and land,
The Lusitanians (Portuguese) will not be content.

The 1701 Act of Settlement led to the House of Orange-Nassau taking control of the British throne.

PAMPOTAMIA could be related to POMPOTANS in Quatrain VIII-97 or PEMPOTAM seen in Quatrain X-100. …In Nostradamus and his Prophecies… Edgar Leoni sees this as a compound word constructed of two Greek and Latin words, Pan, meaning “All“, and “Potens” as “Powerful“, hence “All-powerful“.

It is the last quatrain of the published ten Centuries. Therefore, the importance of Quatrain X-100 and England’s role in world affairs cannot be understated.

In 1605, an alternate Quatrain X-100 began to be published, and then subsequently numbered Quatrain X-101 in later 17th century editions.

Nostradamus Quatrain X-100
When the fork will be supported by two stakes,
With six-half-bodies and six open scissors [M-CCCCCC-XXXXXX/1660/2065]:
The very powerful Lord, heir of the toads,
Then subjugating, all beneath the universe himself.

Nostradamus and the Third Age of Mars, The Complete Prophecies of World War III,
G. A. Stewart, 2019, Page 129

Edgar Leoni tracked the appearance of the extra Quatrain X-100 to 1605. I have not been able to find that edition, so I present Quatrain X-101 from the 1611 edition.

This Quatrain is of course a 1600 Series prophecy and you must add the appropriate Code Key of 405 CE giving the date 2065. It confirms that The Priory of Sion exists. “Heir of the toads” makes this an incredible prophecy.

Before Clovis conversion to Christianity, allegedly the banner of the Merovingian Kings contained toads. During his baptism by St. Rémi in Reims on Christmas Day in 496 CE, an angel descended from heaven with a shield containing the fleurs-de-lis.

This is verification of my interpretation of Nostradamus’ theme of The Last Holy Roman Emperor.

The importance of this duplicate Quatrain cannot be overstated and confirms my conjecture. As I explained in Nostradamus and the Age of Desolation, in the book Holy Blood, Holy Grail, the authors Michael Baigent, Richard Leigh, and Henry Lincoln, were able to connect Nostradamus to the Cathars and Gnostic Christians. This leads to the very secret society, The Priory of Sion.

The general public only recognizes the plot from The Da Vinci Code. Baigent, Leigh, and Lincoln did sue Dan Brown for steeling their plot but lost.

As you will read in Chapter Three, Quatrain X-101 is an amazing bookend to Quatrain X-100, validating the speculation of Michael Baigent, Richard Leigh, and Henry Lincoln in Holy Blood, Holy Grail.