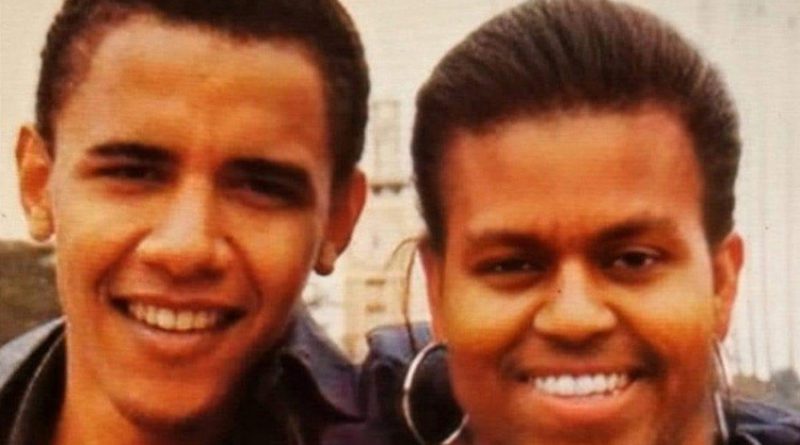 Shamefully, I hope readers are sucked in by the photo and my title. This Update is really not about Michelle Obama’s sexual orientation, but about Nostradamus’ Famous Dead Terrorist, and I suspect that this will lead to her murder.

The following picture comes from Jeff Rense’s website. I do not know the origin, but it fits in with Nostradamus’ prediction of The Created Androgyne. 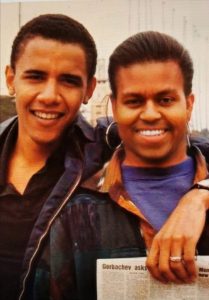 THE CREATED ANDROGYNE MURDERED IN THE SKY

Nostradamus Quatrain II-45
Too much the sky weeps for the Androgyne created,
Near the heavens human blood shed,
By death too late a great people re-created
Late and soon the awaited relief comes.

Readers can find my explanation and interpretation of Nostradamus Quatrain II-45 at the link provided and in my book, Nostradamus and The Third Age of Mars, The Complete Prophecies of World War III.

There are several points here that I want to make regarding the multiple predictions in this Quatrain.

Michelle Obama’s predicted murder is the event that will change America. Part of The Great Scandal is the revelation that Michelle Obama is a man.

“By death too late a great people re-created”. Clearly, Nostradamus points to the fact that the revealing of this secret comes too late for Americans. Nostradamus uses the word late twice, “tarde” and “tard”.

“Late and soon the awaited relief comes” might apply to President Donald J. Trump’s efforts to unveil Nostradamus’ Pagan Sect of New Infidels… that is if Donald J. Trump is for real.

I should clarify my cream-puff analogy in the last Update about people who are all talk, Muhammad Ali was the exception. In fact, he used this very successfully as part of his strategy. Few people in history have had that kind of mental and physical muscle, as well as the discipline to follow through with their bragging.

October 16, 2020
Trump Defends Promoting Conspiracy That Navy SEALs Didn’t Kill Bin Laden: ‘That Was an Opinion’
October 16, 2020
The president declined to denounce QAnon, the false conspiracy theory that Democrats are part of a global pedophile ring, first praising its adherents for opposing pedophilia before saying he knew nothing about the movement.

Donald J. Trump last night: “Saying he knew nothing about the movement”.

G. A. Stewart yesterday morning: “Trump has validated The Q PYSOP through innuendo and sly signaling that leaves him wiggle room to later claim that he never believed in QANON at all.”

Without presenting evidence, Donald J. Trump might as well walk out on the world stage as Bozo the Clown. Conspiracy Theory Presidents are not selling conservatives either.

All those links come from The Drudge Report website. Clearly, Matt Drudge has turned his back on Trump, Republicans, and Conservatives. Fox News is Trump’s last Mainstream outlet, and even that is crumbling.

Many years ago I accepted the title of Conspiracy Theory Fool. I am the Dan Aykroyd character in the movie Sneakers. Like Aykroyd’s character, I get away with it because I have the required skill set. So, people put up with me. And it is easy to see that soon people like me will not be tolerated, even though we are the important gears in the machinery of a modern civilization.

Right after they get rid of us, civilization starts to look like the future world in the movie Idiocracy. 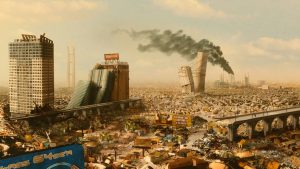 Therefore, I had a reader write to me this morning about Trump’s refusal to disavow The Q PYSOP and now The Osama Bin Laden Scandal. No, this is not good enough. It is a weak statement.

One very smart reader of George Ure’s website, UrbanSurvival.com put two-and-two together from my book, Nostradamus and The Third Age of Mars, The Complete Prophecies of World War III. This leads to the Nostradamus Triplicate Series from The Presages that I discovered in 2014 and posted on this Website and made public for the first time in over 400-years.

He is referring to Nostradamus’ Famous Dead Terrorist who is not dead and The Return of Barack Obama.

G. A. Stewart’s Interpretation: Nostradamus Presage (31) February 1557
The Senate and people are not content. [Commander in] chief abandons [Washington]
The city [Washington] in arms, the palace [White House] menaced,
The exiles of the exiles [terrorists among the refugees] have drawn up [in groups],
Following the lynx [terrorist], the night dead [it cannot hide him, they] know his location,

G. A. Stewart’s Interpretation: Nostradamus Presage (32) March 1557
It is strongly feared that [in] shipping,
[A] Famous dead fugitive [he] will be recaptured:
It will not be in vain, [it will cause] great unrest,
[At the] Point [of arms he] will enter, [he] who doubted being caught.

G. A. Stewart’s Interpretation: Nostradamus Presage (33) April 1557
Done disloyal [the Famous dead fugitive], [he will be] placed in the hands of enemies,
Caught, at night, between fate, [and] sinister intrusions [between terrorist acts]
Monster, the good great council [Congress], the infant placed,
The ambush is his [the Famous dead fugitive] and the Isles boom [from explosions]. 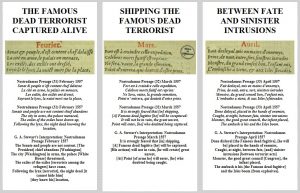 The Osama Bin Laden Scandal is certainly what Nostradamus was predicting, and that day is here. This coincides perfectly with my interpretation. However, consider that this prediction appears in a Triplicate Series. That means the two other Presages are related, and we have revolution and a big terrorist act against the Senate also being predicted.

Since someone in Donald J. Trump’s circle has bought both my 2013 book and my 2019 book, I suspect that some of this material finds its way to Donald J. Trump’s ear and I would offer some suggestions. It is clear that Rudy Giuliani has in his possession some very serious evidence regarding the coming Biden-Clinton Scandal.

The Mainstream Media is now in the middle of getting pounded by Rudy Giuliani’s daily multiple blows.

With The Osama Bin Laden Scandal now qualifying as Nostradamus’ prediction of The Famous Dead Terrorist Who Is Still Alive, clearly the Trump Team is on the offensive, coming from several fronts. How soon before Rudy Giuliani begins delivering the killing blows remains to be seen. We approach the important time of The Great Scandal that I have been writing about for 13-years.

As George Ure’s reader The Bit Coin Nazi pointed out, the isles go boom. It could be Aisles, as in the aisles of Congress or Isles, as in isles in the South China Sea.

Trump would be very foolish to begin a war with either Iran or China. In fact, Trump should make a deal with Iran to extradite Osama Bin Laden to the United States in return for negotiated concessions.

Rudy Giuliani’s slow release of evidence has its inherent dangers. In one minute the world can turn on a dime and what he holds will no longer matter.

I will give the Trump Team some advice that was given to me by a 10th degree Black Belt in Tae Kwon Do who was a national champion in South Korea and who owns a large number of Tae Kwon Do franchises in the United States. During a tournament, he told me that the sole purpose of Tae Kwon Do was to deliver a one blow knockout delivered by your fists or your feet. You do not play with your opponent.

If you are a fan of Mixed Martial Arts, you should take note of the boxers and the grapplers. The martial artists who throw weak punches and kicks will usually get wrapped up by the grapplers who use some form of Jujitsu if the blow is delivered too slow.

There was a Game of Thrones episode that portrayed what happens when you play with your prey.

Tighten your seat belts, the world is getting ready to change. If Trump delivers the killing blow, he deserves to be on Mount Rushmore. Unfortunately, that is not the way I have interpreted Nostradamus’ predictions. I hope I am very wrong.

Instead of Trump asking that Joe Biden be tested for drugs, he should simply challenge Michelle Obama to take a DNA test. You cannot bullshit science.

Michelle, Michael, whoever you are, stay off of airplanes 😉

You heard it hear first. 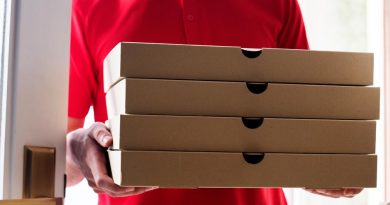 August 1, 2018 G. A. STEWART Comments Off on Protected: Q DELIVERS – COUNTDOWN TO CHAOS 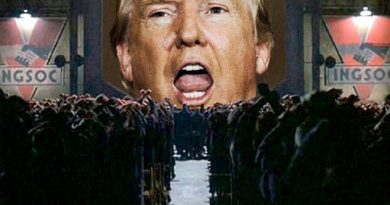 Protected: YOUR CIVIL RIGHTS AND YOUR SOCIAL MEDIA CREDIT SCORE

September 22, 2019 G. A. STEWART Comments Off on Protected: YOUR CIVIL RIGHTS AND YOUR SOCIAL MEDIA CREDIT SCORE

Shamefully, I hope readers are sucked in by the photo and my title. This Update is really not about Michelle