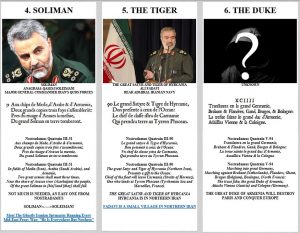 As usual, people are flooding to this Website after the latest breaking news.

As regular readers know, Iran’s Top Military Commander, Qasem Suleimani was on Nostradamus’ list of important World War III leaders. Some of which have been posted on this Website for a decade.

G. A. STEWART
THE LEADERS OF WORLD WAR III

If you have not read any of my material, Nostradamus predicted that World War III started in 2011. I believe that NATO’s invasion of Libya was the event that he saw that guaranteed the inevitability of what people around the world will soon recognize as World War III. For the people of Libya, Syria, and Iraq, World War III started decades ago.

Here is the Quatrain with the anagram of Qasem Suleimani.

Nostradamus Quatrain III-31
In fields of Media (Iran), Arabia (Saudi Arabia), and Armenia,
Two great armies shall meet three times:
Near the shore of Araxes river (Azerbaijan) the people,
Of the great Soliman in [his] land [they] shall fall.

Here is what I just wrote in Nostradamus and The Third Age of Mars, The Prophecies of World War III“.

NOT MUCH IS NEEDED, AN EASY ONE FROM NOSTRADAMUS
SOLIMAN
SOLEIMANI

Iranian Major General Qasem Soleimani will lead his army from the city of Media in Iran into Azerbaijan and Eastern Turkey in an alliance with the Armenian army. There is no doubt that he and The Great Duke of Armenia will know each other.

Here is where I was wrong with my interpretation. “The people, Of the great Soliman in [his] land [they] shall fall“. Nostradamus is not writing about Qasem Suleimani, but the people of Qasem Suleimani, meaning the Iranians.

This means that the Iranians are going to rise up over this, and that “Two great armies shall meet three times“, and then the people of Iran “shall fall“. In my material, that happens in 2038, so we can assume that the first two battles that the Iranians fight, they win.

The war with Iran is unfolding on schedule. Whether it was the United States or Israel that killed Suleimani, it will not change the future. In fact, this alters another prediction that I just published in my book, because it now means Suleimani’s death is the reason war starts. It will unite millions of Iranians.

I identified Qasem Suleimani in 2014. It has been an amazing journey writing these books and seeing how this material actually unfolds. It will be interesting to see how the millions of Muslim refugees in Europe respond to a major Middle Eastern war. Some of the men responsible for that have been on my Nostradamus’ list for years.

Another important figure that readers will be hearing about is this next man.

THE GREAT SATYR AND TIGER OF NORTHERN IRAN

Nostradamus Quatrain III-90
The great Satyr and Tiger of Hyrcania (Northern Iran),
Presents a gift to the Ocean:
Chief of the fleet will leave Carmania (Straits of Hormuz)
One who lands at Tyrren Phocean (Tyrrhenian Sea and Marseilles, France).

He will be the one leading the Iranian Navy in the Persian Gulf.

If you read the next Quatrain, my interpretation from my latest book has changed from my 2013 book, Nostradamus and The Age of Desolation.

DEFEAT OF THE ARAB PRINCE OF WAR

Here is another important Quatrain that I have completely reinterpreted. The Arab Prince of War has another contender beside my original choice of Bandar bin Sultan Al Saud. Bandar bin Sultan is so close to the Bush Family that he is jokingly called Bandar Bin Bush.

The new Arab Prince of War is most likely Mohammed bin Salman.

Many people believe that this Quatrain is similar to Revelation 16:12. It is possible that the Chinese will have a military component in the Middle East; however, logically they will have their hands full with the United States, Japan, and the Pacific alliances with the West.

…”Devers” may be Old French for “towards”. However, I suspect that it is “dériver” meaning, “diverted”.

What this now means in light of the assassination of Qasem Suleimani is that the Iranians are diverted by vengeance. His death will be the spark that creates a million-man Iranian army, “Diverted the Persians (Iranians) well near a million men“.

When I realized that Nostradamus’ million-man Iranian army was not related to the Kings of the East, as written in the Book of Revelation, I suddenly realized how Israel is going to be conquered.

Here is a point to keep in mind, I believe that Nostradamus’ prediction of The Games of Slaughter is a reference to the 2020 Tokyo Summer Olympics and global war. Consider Nostradamus’ time frame in Quatrain V-25, July 20th – August 20th.

Nostradamus Quatrain VII-35
The great fishery come to moan, cry,
At having elected, [Trump] or [deceived] will be in the age:
Scarcely with them not wanting to stay on,
They will be deceived by those of their own language.

And then last night, when I saw Quatrain VII-35, The Electorate Rejects Donald J. Trump and Quatrain VI-25, The Black King Seizes The Hierarchy together in the same post, I suddenly noticed the connection between the metaphors of a fisherman and fish.

THE BLACK KING SEIZES THE HIERARCHY

Nostradamus Quatrain VI-25
Through Mars [War] contrary [to the] the monarch [King/President],
The great fisherman [Pope] in ruinous trouble:
The young Black [King]. red [Muslim] seizes the hierarchy,
The traitors move on a rainy day.

Most Nostradamus Commentators believe that the metaphor applies to the Pope and the Church. I could not help thinking that Nostradamus specifically uses Trump’s name in Quatrain VI-35 in conjunction with “The great fishery come to moan, cry, At having elected, [Trump]“, “Through Mars [War] contrary [to the] the monarch [King/President], The great fisherman [Trump] in ruinous trouble“.

The Fishery is the electorate and Trump is the Fisherman.

So, after another late night providing readers with this Update, I have to get up at 4:30 AM to go to my real-job. Maybe the 99% of the readers that come here regularly and who have not bought a book yet can part with that ten bucks. If everyone of you bought Nostradamus and The Third Age of Mars, The Prophecies of World War III, I could buy a house. There’s that many of you, and it’s been that frustrating.

Money (as we know it) won’t mean much soon, and somewhere along the way, the Internet will be going down. Life is going to radically change… as I said in my post yesterday, sooner rather than later. Good luck out there, we’re all forward deployed now. THE PHYSICIAN OF THE GREAT DISEASE

February 5, 2020 G. A. STEWART Comments Off on THE PHYSICIAN OF THE GREAT DISEASE Protected: THE 3 SUPERPOWERS GO TO WAR The 2012 Mayan Apocalypse is now called The 2012 Phenomenon. I believe Quatrain VIII-71 pertains to the sensationalizing of December 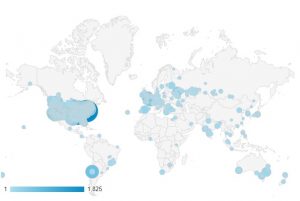