Below, following those Presages, are Quatrains VI-21, VI-22, and VI-23. These are what I call a Triplicate Series. Readers should note the printing errors over the history of the published Centuries.

Every Nostradamus Commentator over the last four-hundred years has missed the mistakes and perpetuated the glaring errors.

I suspect that these Quatrains indicate the rebuilding of the Great Temple in Jerusalem.

Nostradamus and the Third Age of Mars, The Complete Prophecies of World War III, G. A. Stewart, 2019
Edgar Leoni set the standard for modern Nostradamus Commentary, and as far as I am concerned, every major English Nostradamus Commentator has mimicked Leoni’s work and research, because Leoni’s mistakes appear in their work.

Counting the known Quatrains, Presages, and Sixains published in English to date comes to 1168 prophetic poems. I discovered evidence that points to 1197 poems, with four of those unpublished poems appearing in Nostradamus and the Third Age of Mars, Volume I, making the new total of published poems 1172.

The public has not read those four Presages in nearly five-hundred years, and so I throw down my gauntlet to other Nostradamus Commentators to top that fact. Three of these Presages are a very important Triplicate.

Unfortunately, many Nostradamus Commentators do not even recognize Nostradamus as the author of The Sixains. I have provided enough evidence in my books to prove them wrong.

…If you find the popular modern authors who publish a version of Nostradamus’ “Complete Works” that follows this same Presage structure with the same missing Presages, then they are most likely riffing from Edgar Leoni’s great book, Nostradamus and His Prophecies.

Leoni used a 1630 Nostradamus Compendium that published The Centuries, most of The Presages, and The Sixains in one book. How the 1630 collection of The Presages was assembled from the thirteen Almanacs is not known, but I suspect that twenty-nine Presages have never made it into any compendium of Nostradamus’ work.

From my research, it appears to have been a mistake that was generated in a collection of Presages that was first published in 1567, a year after Nostradamus’ death. I had my Nicholas Cage, National Treasure moment when I uncovered the original structure of Nostradamus’ Presages.

You will only find one-hundred and forty-one Presages in every English version of Nostradamus’ “Complete Works”.

Presage 51 (73) June 1560
Old fire chased by the new flame,
And by the end it shall be what it was
Fear, out of the siege, and joy [to] the great Lady,
And not everything held that was promised. 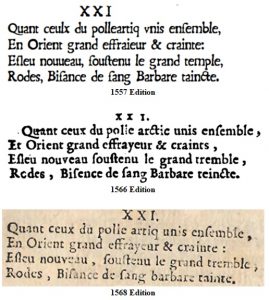 Nostradamus and the Third Age of Mars, The Complete Prophecies of World War III, G. A. Stewart, 2019
Quatrain VI-21 begins another important Triplicate Series, and there is a nest of them in the very important Century VI. This is also where my research shines. Readers are seeing the correct Quatrain for the first time in publishing history.

To test this theory, go to any published book on Nostradamus’ Centuries and look this Quatrain up.

Quatrain VI-21 presents readers with another printing conundrum. The 1557 edition has “the great temple” in line three. Every edition after that has “the great tremble”, which other Nostradamus Commentators have taken as an allusion to war.

The 1557 Edition was the first printing of this Quatrain and the following Quatrain VI-22 mentions “the great celestial or heavenly temple”. Since Nostradamus was still alive in 1557, I tend to go with “the great temple”. This is clearly a part of a Triplicate Series.

There is a great deal of war-like imagery. “When those of the arctic pole [NATO] unite assembling”, and “Rhodes (Greece), Byzantium (Istanbul, Turkey) stained with Barbarian blood”.

With Temple appearing in the next Quatrain, I am now completely going with the 1557 Edition. Readers should note that no other Nostradamus Commentator in history has discovered these mistakes.

Here is another important Quatrain that suffered from a printing error. After nearly 500 years of Nostradamus Commentary, the mistake has been perpetuated and the interpretations have continued aimlessly.

BLOODY APRIL 19th AND APRIL 20th
THE EVOLUTION OF AN ERROR

Nostradamus Quatrain I-42
The tenth of the Calends of April in Gothic Count [April 20th]
Revived again by evil people:
The fire extinguished, diabolical assembly
Seeking the gold owed the lover and Pselyn [Henri Selyn].

Nostradamus and the Third Age of Mars, The Complete Prophecies of World War III, G. A. Stewart, 2019
Every English translation for this Quatrain has failed since 1672. I am correcting a 345-year-old error.

Since 2008, I have noticed many blogs referring to the inordinate amount of bloodshed and carnage that has occurred throughout history on April 19th and April 20th. I pioneered this research, and it first appeared on my website in 2008.

April 19th is also the occult day of The Blood Sacrifice to the Beast. This begins the 13-day countdown to the second most sacred day for Satanists, The Beltaine Festival on May 1st, which requires a “fire sacrifice”.

…In the 40 Quatrain edition is where we see “or” become “os”. Instead of Gold, commentators since have translated it as Bone. Note that “Pselyn”, “Pselin” is also printed as “Prelin”.

I would suggest that for the 1555 and the 1557 editions with 42 Quatrains in Century VII, that Nostradamus was present to correct any errors and give his approval to the printers. “Pselyn” versus “Pselin” and the “y” to “i” change is a common acceptable alternative.

The six extra Century VII Quatrains known to date suggest that at one time there were one- hundred Quatrains.

After the 1557 edition, the original word “or” was lost for nearly five centuries until my correction here. “Os” became an embedded mistake.

I would like to make this Website a repository of Nostradamus’ prophetic writings. I am looking for the 60,000 readers of this Website to purchase my soon-to-be released book, Nostradamus and the Third Age of Mars, The Complete Prophecies of World War III.

My goal is to raise enough money to explore some Paris Libraries looking for the oldest Nostradamus writings in print. You can help. 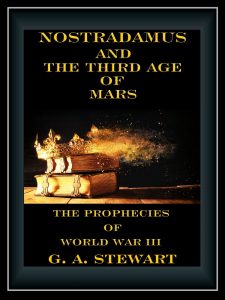 Protected: I HEAR THE TRAIN A COMIN’ Protected: TRUMP AND THE THIRD TEMPLE

March 24, 2019 G. A. STEWART Comments Off on Protected: TRUMP AND THE THIRD TEMPLE